In 1989, Stevie Ray Vaughan was part of an all-star blues lineup that played a concert for the inauguration of George H.W. Bush. The Wall Street Journal’s Speakeasy today premiered video of SRV playing “Texas Flood” with Double Trouble, and his brother, Jimmie Vaughan — part of 25 minutes of Vaughan songs.

The entire two-hour concert will be released May 6 through Shout Factory as “A Celebration of Blues and Soul: The 1989 Presidential Inaugural Concert.” 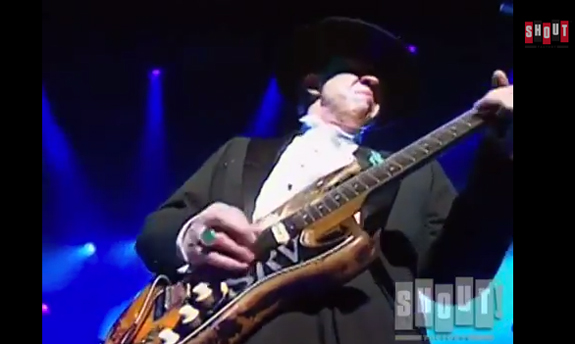 … The stage heated up with a series of impressive guitar solos from artists honoring Vaughan & Double Trouble. Double Trouble’s Chris Layton, Tommy Shannon and Reese Wynans shared the stage with Kenny Wayne Shepherd, Mike Farris, Doyle Bramhall II, Robert Randolph, Eric Zapata and Buddy Guy. Stevie Ray’s brother Jimmie, who is on tour in Australia, appeared in a video honoring his younger brother. You could feel the spirit of Stevie as Randolph and Bramhall tore up “Pride and Joy.” Rounding out a night of incredible music, Nelson, Lovett and Nelson’s son, Lukas, joined everyone on stage for the grand finale, “Texas Flood.” 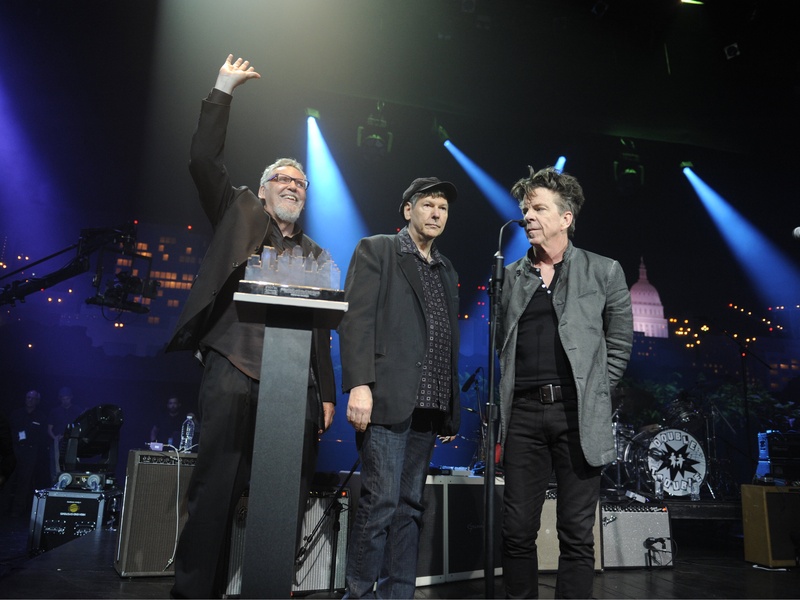 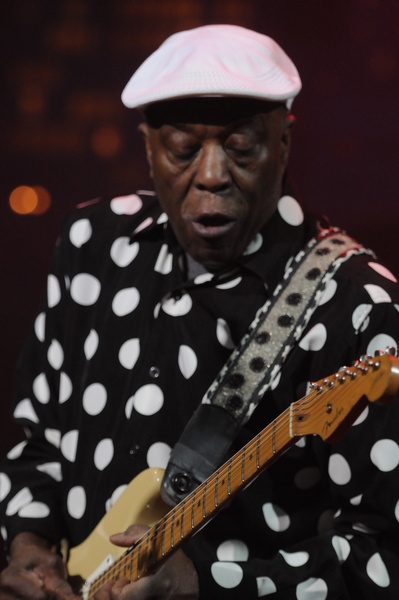 To celebrate its 40th season, Austin City Limits has announced the ACL Hall of Fame. Its first musical inductees will be Texas music legends Willie Nelson and Stevie Ray Vaughan and Double Trouble. They will be honored alongside two individuals who played a lasting role in the success of the series: the show’s creator Bill Arhos and former University of Texas football coach, Darrel K Royal.

ACL will return to its original home, Studio 6A on the University of Texas at Austin campus, for the inaugural induction on April 26. An invitation-only event, the inaugural ceremony will feature performances by artists including Doyle Bramhall II, Mike Farris, Buddy Guy, Emmylou Harris, Lyle Lovett, Lukas Nelson, Robert Randolph and Kenny Wayne Shepherd as well as Willie Nelson. 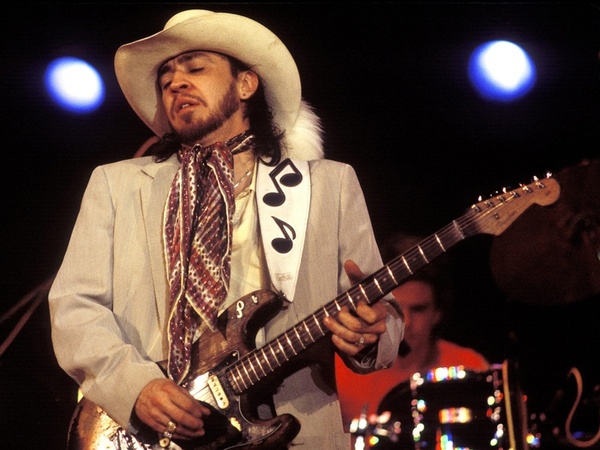 This March, PBS viewers will be treated to the world television premiere of a never-before-seen historic concert featuring Stevie Ray Vaughan and some of the biggest names in blues and rock history performing their greatest hits. Recorded during a live Presidential Inaugural concert event in 1989, the video and audiotapes of this concert were presumed lost for nearly 20 years.

Stevie Ray Vaughan & Double Trouble were among 12 artists saluted by the Musicians Hall of Fame and Museum, in the Nashville-based organization’s first induction ceremony in nearly five years. 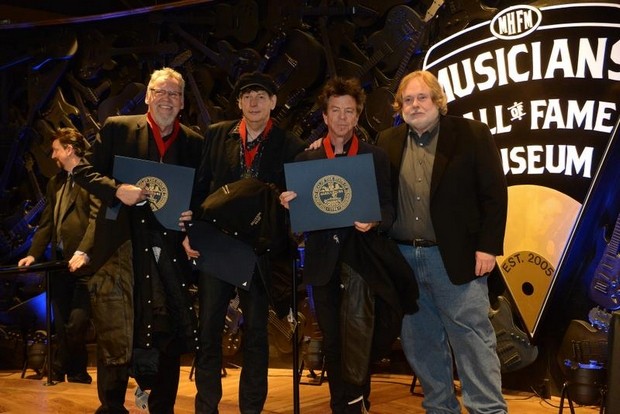 Read more and view photos at The Tennessean.

With Stevie on guitar, Chris Layton on drums, Tommy Shannon on bass guitar and Reese Wynans on keyboards, Stevie Ray Vaughan & Double Trouble ignited the blues revival in the 1980s with sold out concerts and Gold records.

The 2014 Induction Ceremony is open to the general public. Tickets begin at $35 and are available for purchase at Ticketmaster. 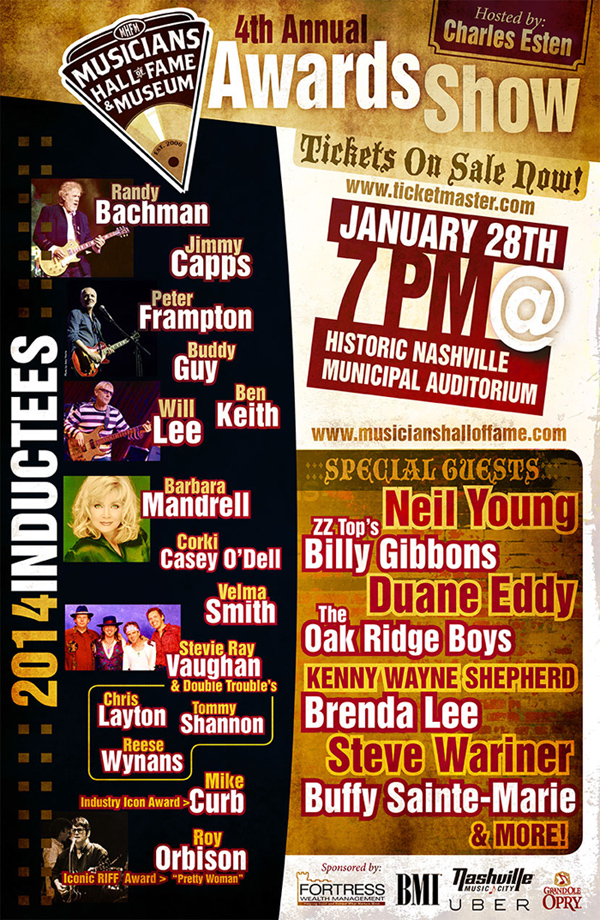 Guitar World has rounded up the Top 20 reissued/remastered or archival releases of 2013, with Stevie Ray Vaughan and Double Trouble’s Texas Flood Legacy Edition coming in at No. 1 on the list!
Read more at Guitar World. 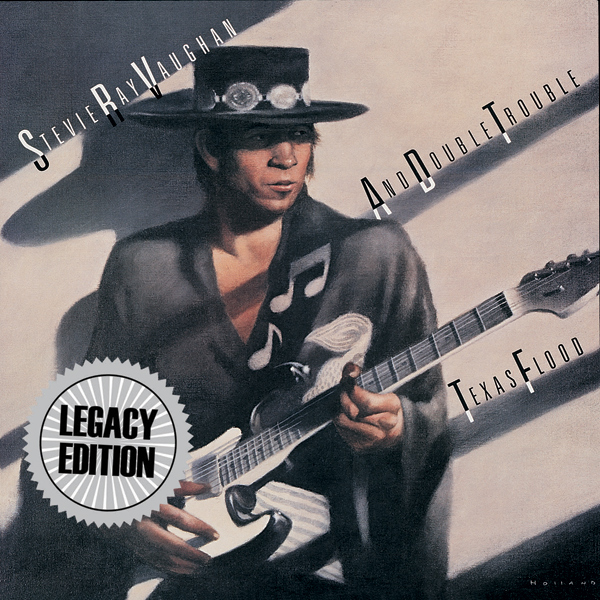 The 1987 Cinemax concert special A Blues Session: B.B. King and Friends kicked off with one of the single most star-packed jam sessions ever held outside the annual Rock and Roll Hall of Fame induction ceremony. B.B. King, Eric Clapton, Stevie Ray Vaughan, Albert King, Phil Collins, Dr. John, Etta James, Chaka Khan, Gladys Knight, Paul Butterfield and Billy Ocean all came together at the tiny Ebony Showcase Theater in Los Angeles to perform a supremely upbeat rendition of “Why I Sing the Blues.”

Watch the video below and read more at Rolling Stone.

October 3: Stevie Ray Vaughan was born on this day in 1954, and remains one of the most influential guitarists who ever lived. 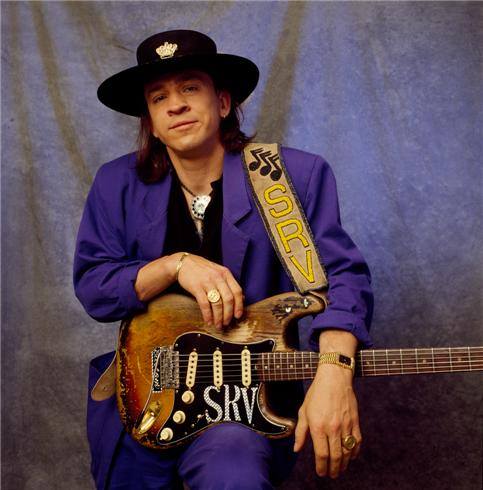 Today, on the 23rd anniversary of Stevie Ray Vaughan’s passing, our friends at Rock Paper Photo are helping us to celebrate the life of the guitar legend by inviting you to discover a collection of photographs that capture his unique talent, raw power and unmistakable style. The photographers who shot these images, which are available for sale as limited edition prints, include Robert M. Knight, Tracy Ann Hart, Chuck Pulin and Deborah Feingold. For many, Stevie Ray Vaughan was more than just another musical legend to photograph; he held a special place in their hearts too.

Robert Knight got to know SRV well after shooting many dates on the 1989 tour with Jeff Beck, which produced several magazine covers. “A lot of time, he would come into Los Angeles, give me a call and we’d just hang out and talk,” recalls the photographer who is now based in Las Vegas. Painfully, Robert snapped the last shots of SRV shortly after the band played in Alpine Valley, Wisconsin, on August 26, 1990. It took the photographer two years even to look at those shots of his close friend again. In fact, Stevie had asked Robert to return to Chicago with him to see Buddy Guy play but Robert didn’t like the idea of flying at night in helicopters. Robert’s well-known image of Stevie on stage in Minneapolis was made with a special film developing process Robert developed in the late 60’s, producing the illusion of blackness around the musician. Another photograph of Stevie Ray appeared on the cover of the 2006 Sony Legacy release, The Real Deal: Greatest Hits Vol. 1. 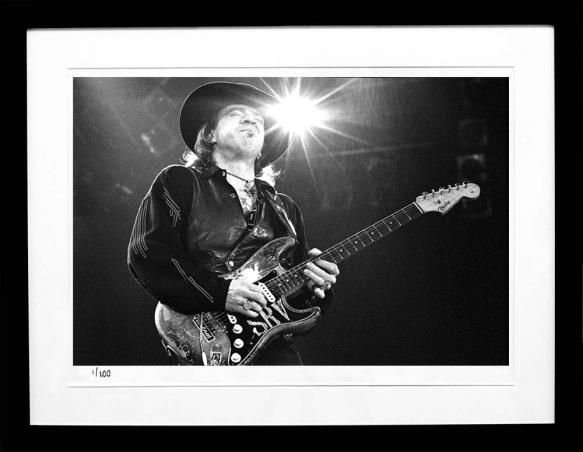 Houston-based photographer Tracy Anne Hart also was deeply affected by her years of shooting Stevie from 1983 until his death in 1990. Her prints of SRV have been exhibited extensively throughout the U.S. and also appeared in Sony Legacy CDs, on PBS Television, and in many books, magazines and DVD’s. Tracy remembers photographing SRV at a live date outside the Houston Astrodome in 1989. She describes the sound as “sweeping through the crowd like a storm in the middle of a Texas summer.” She says, “To really understand the power of Stevie’s playing you have to look beyond the equipment and into his heart, and at his strong, beautiful hands.” 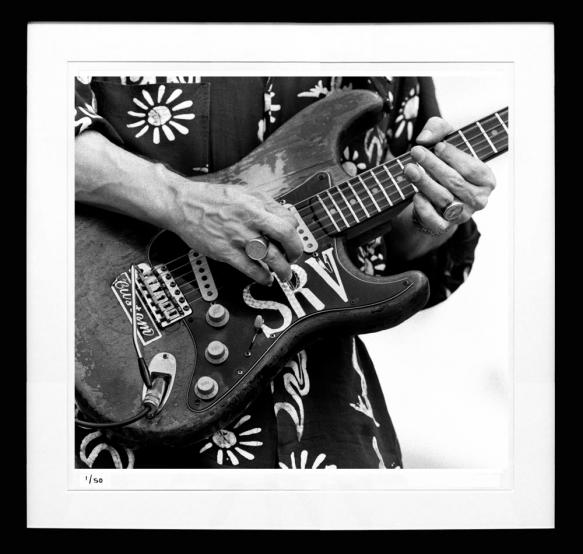 Working for Musician magazine, Deborah Feingold photographed the Texas bluesman in NYC in the summer of ’83 just after the release of Texas Flood. After initially shooting SRV in her apartment, the duo took a walk to a barren stretch of landfill by the World Trade Center. “He took his guitar out and we started shooting,” she recalled in a recent magazine interview. Rejected by the magazine in favor of a more “mainstream” shot, this beautiful image remains a personal favorite of hers. 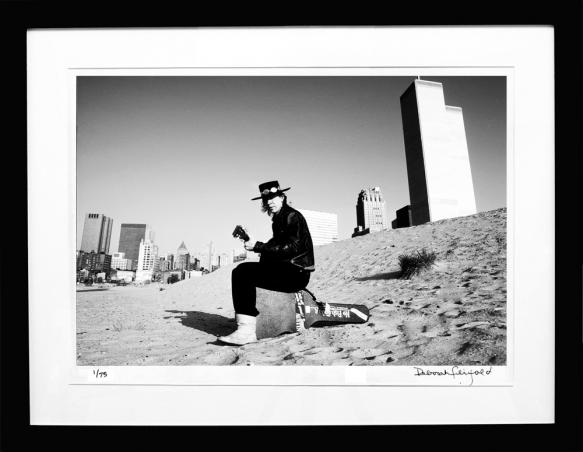 Another New York-based photographer, Chuck Pulin, who was on staff at Billboard magazine for many years, met Stevie in the early 80’s and forged a close friendship. Chuck became Stevie’s personal photographer. His photos of Stevie included jam sessions, recording sessions, and backstage moments with music legends including Mick Jagger, David Bowie, Jeff Beck and Greg Allman. Chuck’s photos of Stevie have appeared on CD covers, DVD jackets, and in television shows, books and magazines. 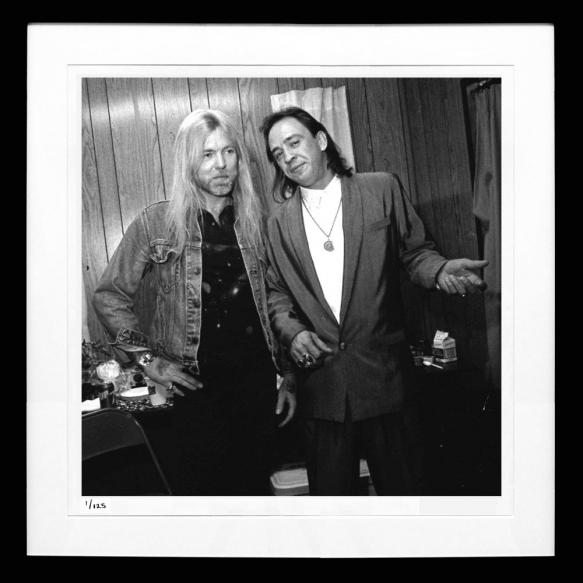 Check out the great works by these and other noted photographers in the special Rock Paper Photo collection of limited edition prints celebrating Stevie’s years as one of our greatest musicians. You also can view selected images in the Stevie Ray Vaughan photo gallery.