Jimmie Vaughan split from the South Dallas neighborhood of Oak Cliff to Austin nearly as soon as he was able to drive, and his little brother, Stevie Ray Vaughan, soon followed. Now their old stomping grounds, which is enjoying a renaissance, wants them back.

In an effort to reclaim the guitarists as Dallas’s own, the Oak Cliff Cultural Center will host “The Vaughan Brothers in Dallas: A Photo Exhibit,” culled from shots by Kirby Warnock, the Dallas filmmaker and journalist — including one of Stevie Ray playing a Freddie King memorial concert in 1980, with his famed Fender Stratocaster only days after he bought it, before he stickered it with “SRV.”

October 4, 1984: Stevie Ray Vaughan played a sold out benefit concert with Double Trouble at Carnegie Hall in New York City. The proceeds went on to support the T.J. Martell Foundation.

Stevie Ray Vaughan would have been 57 years old today, October 3rd. In honor of his birthday, PopMarket.com is offering the SRV collection for the exclusive price of $29.99, today only while supplies last. 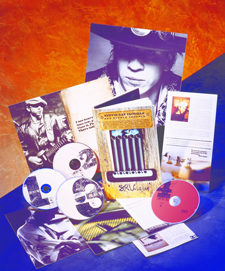 This box-set collection from the Blues/Rock guitar legend covers the years 1977 to 1990 and features:

Compiled from studio sessions, live shows, and rare radio and TV broadcasts, this 3-CD/1-DVD deluxe box set chronicles Vaughan’s work from his early days with Paul Ray And The Cobras to the legendary shows from the last month of his life.

If you’re not a PopMarket member, join for free now to get hot deals on the coolest music.

The Dallas Morning News reports that Jimmie Vaughan will sit down and talk, and also perform in “The Soul of Oak Cliff” series at the Texas Theatre on November 10th. Before the show, organizers said Jimmie will discuss growing up in Oak Cliff and its influence on him and his brother Stevie Ray Vaughan. “He will talk at length about Stevie and the day he died,” said Kirby Warnock, an Oak Cliff resident and organizer of the event. “It will all be new, and very real.” Six-hundred tickets will be sold for the event, including 95 VIP seats that will include time with Jimmie after the show. Read more at DallasNews.com. Ticket prices and more information will be posted at TheTexasTheatre.com.

Guitar World has republished its first interview with Stevie Ray Vaughan from the magazine’s May 1984 issue. In the article, the magazine wrote: “In an age where musical tastes are being shaped by technological innovations, where sensibilities are being assaulted by arsenals of Linn drums and Fairlights and Mini Moogs, it’s downright refreshing to see someone playing straight from the gut again. …His secret? A soft-spoken, laconic man, Stevie Ray sums it up in three little words: “I just play.” Read the full article at GuitarWorld.com.

Saturday August 27th marks 21 years since the world lost Stevie Ray Vaughan. In an article published by The Associated Press, his brother Jimmie Vaughan said one of the hard parts of handling the loss was meeting fans who wanted to express their condolences, and Jimmie was not ready to talk about it. But he’s better about talking about Stevie Ray now. Read more at WTHR.com.

In an interview with the Chicago Tribune, Jimmie Vaughan talked about how his brother Stevie Ray first met Albert King. “When Stevie was 19, we were at (Austin blues club) Antone’s and Albert King was playing. (Club owner Clifford Antone) says to Albert you’ve got to let this kid play, because he’s (amazing).”

“Now Albert had heard it all, but he got Stevie up there, and Stevie commenced doing Albert King licks. There was silence at first. Everyone stood there with their mouths open. They couldn’t believe it. But Albert loved it. He put his arm around him, and from then on it was Albert and Stevie. Everybody went, ‘Whew, that was scary.’ I would never have tried that, but you’ve got to admire the audacity.”

Fans of Stevie Ray Vaughan, be the first in America to experience Spotify! Spotify is currently available in the U.S. by invitation only, but you are one of the lucky few to get access. All you need to do to create your free Spotify account is follow this VIP invitation link from Legacy Recordings.

Once you’ve created your free Spotify account, you can listen to your favorite artists and add them to your personal playlists. We hope you enjoy!

Spotify is the award-winning music platform that gives you on-demand access to over 15 million tracks in high-quality audio, wherever you go. Whether you’re searching for the hottest new releases or hits from the past, your favorite tracks are just a click away. If you’d like to learn more, come this way.

When blues guitarist and vocalist Stevie Ray Vaughan released Texas Flood in 1983, he introduced Texas blues to a much broader audience than it had previously known. His impact was great enough that even today, 21 years after his death, if you ask a music lover to name a Texas blues guitarist, he or she will probably reply, “Stevie Ray Vaughan.” Read more at NPR.org.

Stevie Ray Vaughan’s childhood home has been included in a list of At Risk Architecture by the Old Oak Cliff Conservation League. The list is intended to draw attention to local landmarks to protect them from degradation or demolition in the future. You can read more about the League’s work in The Dallas Morning News, and find out more about Stevie Ray’s childhood home and other properties on the list at OOCCL.org.