August 27: Today is the 25th anniversary of one of the saddest days in music history. Stevie Ray Vaughan was only 35 years old when he lost his life. This photo captures Stevie on stage in New York shortly after the release of his immortal debut Texas Flood.

Guitar World is celebrating what they believe to be the 10 greatest guitar moments of Stevie Ray Vaughan’s career by posting 10 historic performance videos. Do you agree with their list?

The city of Dallas has signed off on Oak Cliff filmmaker Kirby Warnock’s proposed piece of public art in Kiest Park honoring Stevie Ray Vaughan and older brother Jimmie. … Without any discussion, the Dallas City Council OK’d spending $142,000 on the yet-to-be-defined piece.

About half of that ($74,000) will come from 2006 bond funds already set aside for a piece in Kiest Park, which is mere blocks from the Vaughan brothers’ childhood home. The rest will come from the Oak Cliff Foundation, which is on the hook for $68,000 – $28,000 of which will go toward the project, with the other $40,000 being set aside for its future maintenance.

Read more at The Dallas Morning News. Contributions, to be managed by the Oak Cliff Foundation, can be made at The Vaughan Brothers Art Project website. 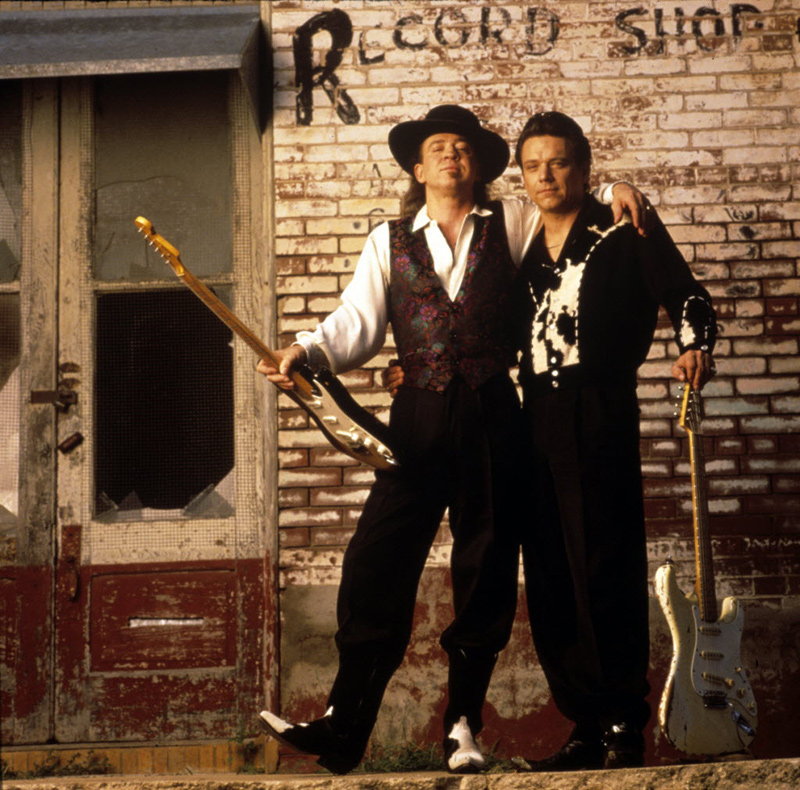 Tune in to the Rock and Roll Hall of Fame induction ceremony this Saturday, May 30th at 8 p.m. EDT on HBO​! John Mayer​ inducted SRV & Double Trouble during the ceremony, which was recorded April 18th at Cleveland’s Public Hall. Jimmie Vaughan, the members of Double Trouble, and their guests all performed.

In celebration of SRV & Double Trouble’s induction, here are some of their best music videos.

Listen to the ‘Class of 2015’ Spotify Playlist: https://smarturl.it/rrhof15_sptfy

HBO has released a video with highlights from the 2015 Rock and Roll Hall of Fame Induction Ceremony, which will air on May 30th at 8 p.m. ET, exclusively on HBO. In the video below, tune in around 2:09 for a glimpse of the tribute to Stevie Ray Vaughan and Double Trouble.

“When it turned out we were nominated, next thing I know we are the top vote getters–18 million votes,” keyboardist Reese Wynans said. “’Unbelievable,’ I said, “This is too much, too much to ask for.'” – TWCNews

It was a moment fitting of the magic and emotion that filled Stevie Ray Vaughan’s music.
Having thrilled the capacity crowd Saturday at the 30th annual Rock and Roll Hall of Fame induction ceremony with sizzling blues guitar solos and fever-pitch vocals on Stevie Ray Vaughan’s “Pride and Joy” and “Texas Flood,” Jimmie Vaughan gathered the members of Double Trouble and their guest performers for the finale of their three-song set. Jimmie alone played guitar as they went into “Six Strings Down,” a tribute to his younger brother from Jimmie’s 1994 album Strange Pleasures.

… Finally getting the nod from the Rock Hall, seven years after Stevie and his band first became eligible, clearly meant a lot to everyone involved. “It’s very emotional, but it’s also happy, too,” Jimmie said Saturday morning. “We all loved my brother.”

Double Trouble bassist Tommy Shannon, who also celebrated his 69th birthday Saturday, agreed. He kept his acceptance speech admirably short, concluding simply that “if it wasn’t for Stevie, I wouldn’t be here.” Earlier Saturday, he’d said that if Stevie were here, “I think he would have loved it. He was a very humble guy. I think he would be very thankful and glad to be here.”

… Drummer Chris Layton shared a few stories about Stevie and remembered how the guitarist summed up the band’s credo: “We need to put our foot on the gas pedal, and we need to floor it.” – Austin American-Statesman

John Mayer took the stage to speak about the man who he’s said is his biggest influence, Stevie Ray Vaughan. “I figured out there was two ways to play guitar. There was playing chords, and doing that other thing, [which] was elemental. Stevie Ray was doing the other thing. Stevie Ray Vaughan is the ultimate guitar hero.”

“There was an intensity there. There was intensity that only he could achieve, it was as otherworldly as Hendrix, but while Hendrix came from outer space, Stevie came from below the ground. He took the style of every blues guitar player who ever lived, and put it into one language.”

After the members of Double Trouble spoke, Jimmie Vaughan, a solo artist and guitar legend, said that his younger brother loved playing guitar more than anyone he ever knew, and said that Stevie Ray would have been proud to be inducted. “I couldn’t be more proud of him; he was the most talented cool brother anyone could ever have,” he said, choking up. “Music lost a good man, our family lost our beloved. Every day I wake up sober, I think of my brother. In the end, the little brother taught the big brother.” – Radio K-Earth

Gary Clark, Jr. has been added to the performance tribute to Stevie Ray Vaughan and Double Trouble at this year’s Rock and Roll Hall of Fame induction ceremony on April 18. As previously announced, SRV’s brother, Jimmie Vaughan, also will perform and John Mayer will induct SRV and the band.

Tickets to the ceremony are sold out, but there’s still space at the big-screen simulcast at the Rock and Roll Hall of Fame and Museum — the only place to see the ceremony the night of the event ($22; tickets.rockhall.com). HBO will air the ceremony on May 30.